Last week we ran a news story about the hauling of long, heavy concrete beams for reconstruction of the Interstate 5 bridge over the Skagit River in northwestern Washington. You may recall that a section of the aging steel truss bridge tumbled into the water on May 23 when an oversize load hit an upper support beam. 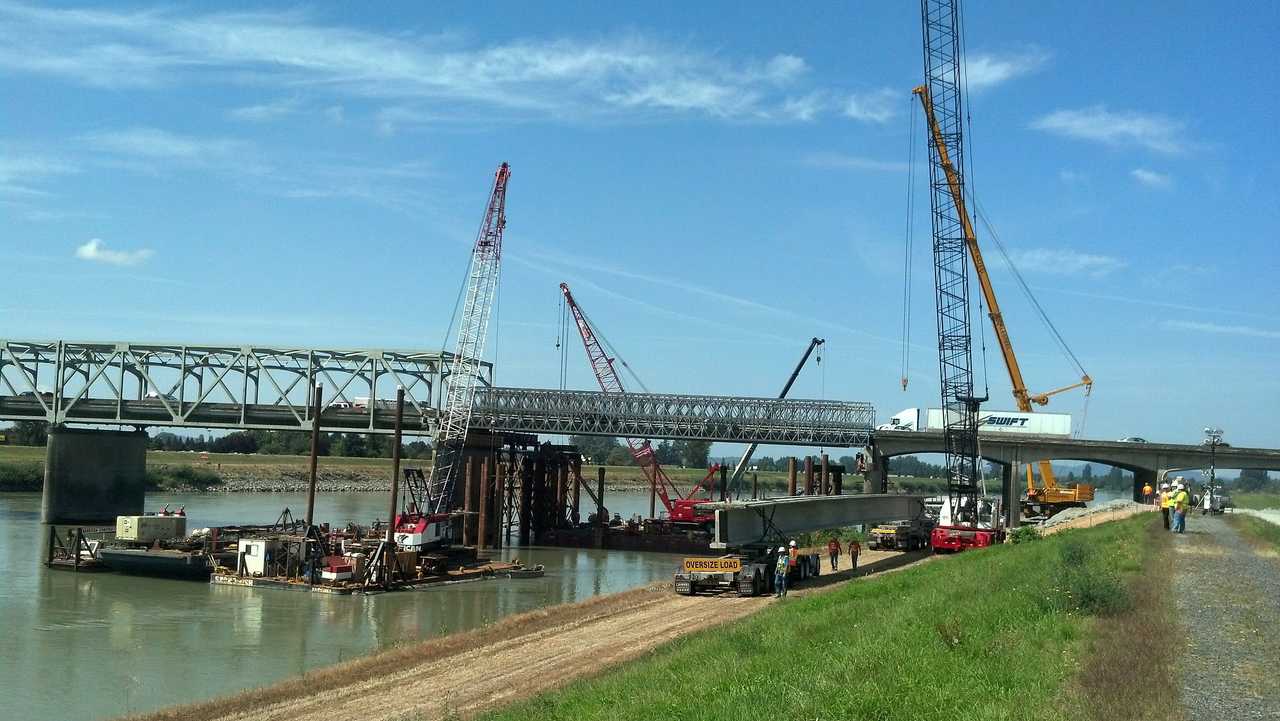 A 162-foot-long, 168,000-pound concrete beam has arrived at the job site aboard a 14-axle rig. I-5 bridge over the Skagit River is being rebuilt after a section was knocked down by an oversize load aboard a semi. Photos by Washington state Department of Transportation.

A photo in our story showed a special trailer that carried one end of a beam, and that got me curious. So I called V. Van Dyke, Inc., in Seattle, a specialized carrier that hauled the eight beams to the work site.

Barry Hunt, the company’s general manager, explained that what looks like a trailer from the rear is actually a “jeep” hitched to a “steer car.” The three-axle steer car has a driver’s cab and a fifth wheel, so it’s sort of a non-powered tractor. Its driver steers the front axle, “just like on a truck,” and the four-axle jeep — a short, gooseneck semitrailer — follows along. 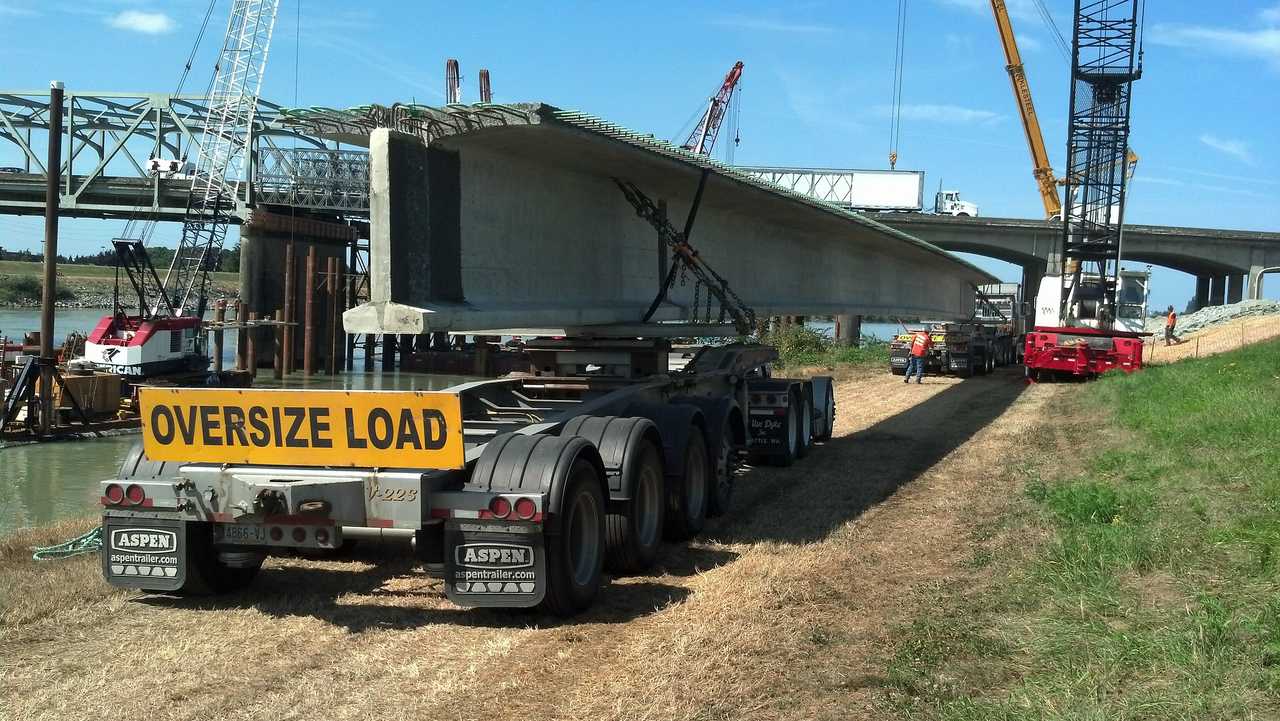 Rear of load is supported by a “steer car” and “jeep” owned by V. Van Dyke, Inc., of Seattle, which hauled eight beams from Tacoma. WashDOT photo.

Of course, so does the rear of the load, which rests on a swiveling bunk atop the jeep. The front end of the load rests on another jeep, this one with three axles, pulled by a four-axle tractor. Fourteen axles limited the rig’s weight to 20,000 pounds or less per axle, he said.

Concrete Technology in Tacoma cast the beams for this job. From there it was a three-hour run to the job site; three beams were hauled on each of two days last week and the last two were delivered on a third day. Each beam is 162 feet long and weighs 168,000 pounds, according to the Washington Department of Transportation, which is overseeing the project. 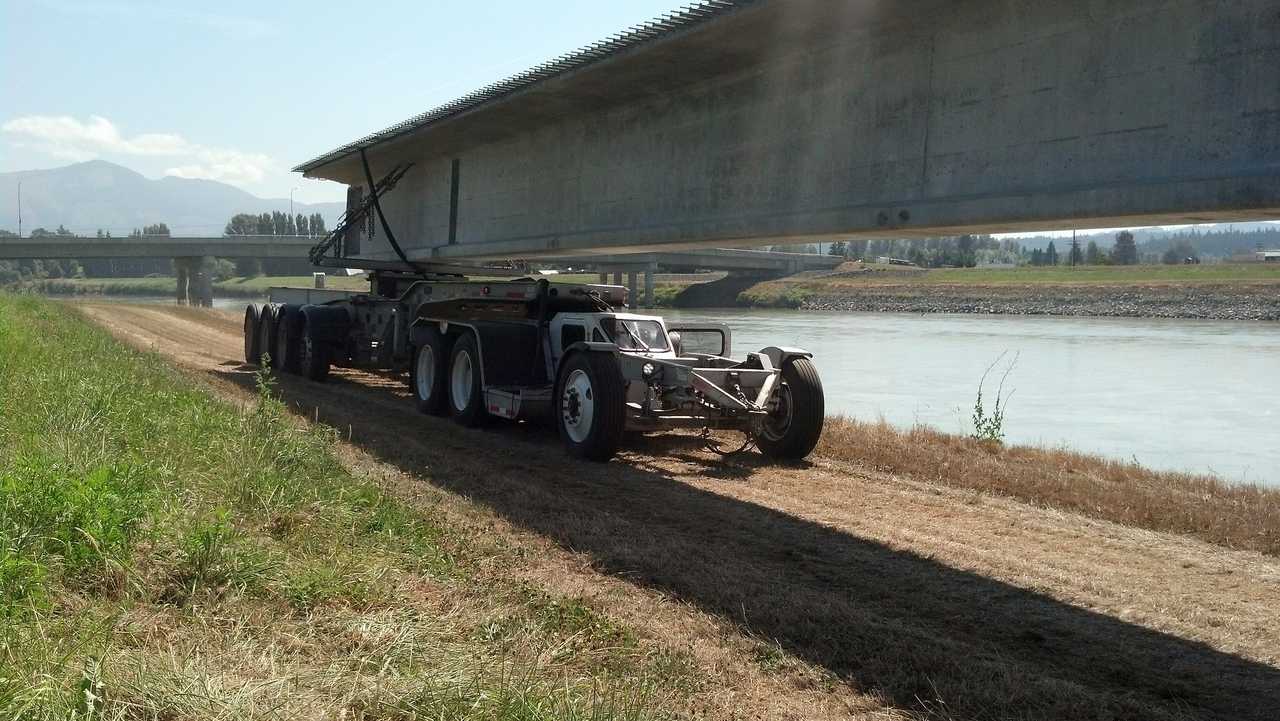 Van Dyke’s shop built 11 three-axle steer cars like this one. It’s hitched to a four-axle jeep with a swiveling bunk for the load. WashDOT photo

The carrier’s own shop built 11 of the steer cars, Hunt said. The two latest ones have auxiliary engines to run power steering pumps, but the others are non-powered and the steering is “armstrong.” Long umbilical cords from tractors supply electrical power and air to rear equipment. Aspen Custom Trailers in suburban Edmonton, Alberta, built some of the jeeps used in the haul. 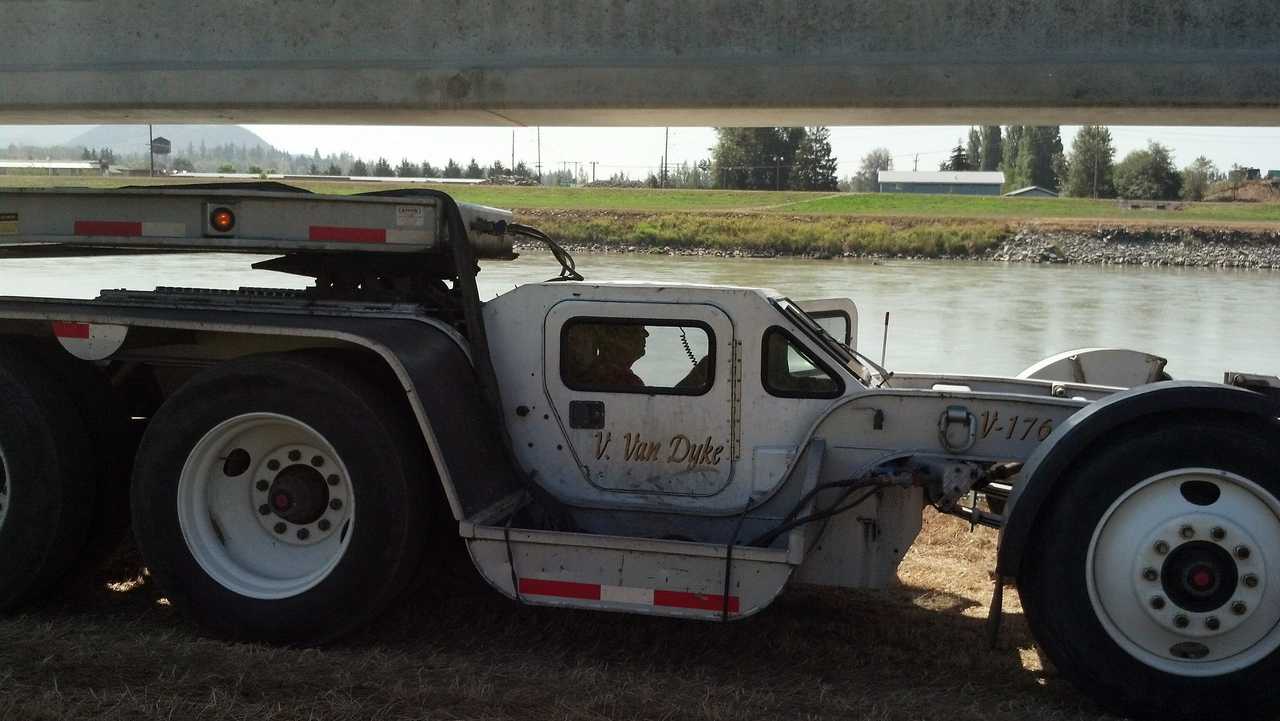 Rear driver sits in low-slung cab and steers the car’s front axle, as he would in a truck. Latest cars have power steering from an auxiliary engine, but most have “armstrong” manual steering. WashDOT photo.

This haul was typical of the company’s business, which also includes moving long, heavy steel beams. It takes care and skill. “The drivers are all long-time employees,” he said, and “very experienced.” Hunt himself has been in this business for more than 30 years

How fast did these big-beam rigs travel? “Normal highway speeds,” Hunt said. “For something this big, about 50 miles an hour.”