V. Van Dyke, (buss bilt) a Seattle-based long load specialist show us their take on how a rear bogie should be built. Envisage a motorbike sidecar: stick a steering-wheel on it and put a roof over the top. Sit it in the middle of the rear axles; sit 100t above your head – and away you go. It’s insane. Richard Tew reports. 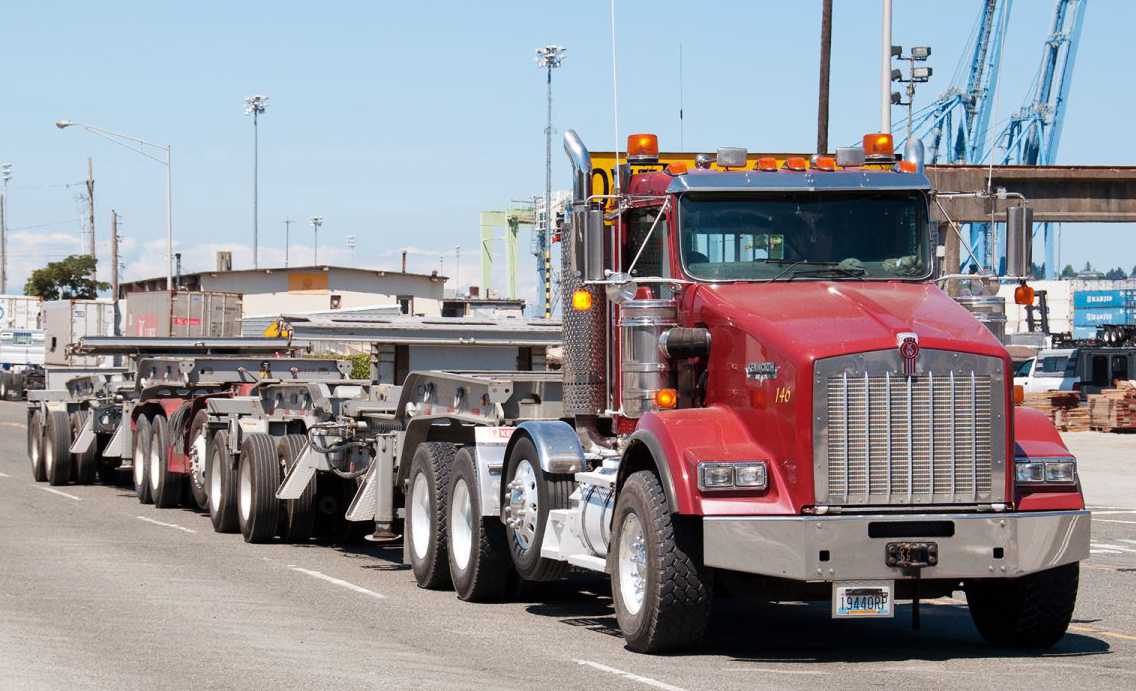 The later 4-axle steercars have some notable improvements. These are fitted with a 16 horsepower Kubota diesel engine, providing hydraulic power-steering essential when being used on lighter loads without a jeep dolly.

The engine also provides electrical power to the cab: running a heating unit, wipers, headlights, back up and interior lights. All exterior lighting and air supply is supplied via an umbilical cord from the tractor unit.

Air-ride-rear-bogie suspension is provided by Ridewell: the front axle of the tridem is a self-steer lifting axle, with a centre lock-up facility for use when reversing.

The tare weight of the steercar is 5.67 tonnes, with a steer axle capacity of 7.25 tonnes. The tridem bogie capacity is 29.5 tonnes: the loaded capacity of the 4-xle steercar alone is 31 tonnes. The 4-axle dollies, or jeeps (to use the American parlance) have a net capacity of 25 tonnes, which gives a 56 tonne loading for this particular steercar/dolly combination.

Even heavier loads can be carried on jeeps which have dual-lane configuration with 16 wheels per axle; when used with a pin-on bolster axle, the jeep alone has a 48 tonne capacity.

Obviously permitted weights are dependent upon local weight allowances and such things as bridge restrictions. Various combinations of steercar and jeeps can be used to suit the job in hand.

In an eminently sensible move, steer-axle, suspension, brakes, steering box etc. are all Kenworth parts, tied in to a Kenworth chassis number – this simplifies ordering spares.

All the units are fitted with anti-skid breaks: the excellent engineering can be seen in the accompanying photographs.

The big advantage of using steercars is that the laden outifts can (and do) travel at normal highway speeds – where it is safe to do so.

There is no need to make a stop for the steersman to walk to the rear of the load when required. He is permanently in position, protected from the elements, enabling the outfit to keep moving.

The steercar idea is thought to originate from the US Fire Service, who use a similar idea on their long turntable ladders. Most of us have seen US films where a steersman – in his lofty perch at the rear of an articulated ladder – deftly steers the rear-end through city traffic.

Boeing Aircraft Corporation then developed steercars to assist in transporting wings for the 747.

Tractors used by V Van Dyke are all Kenworth T800 models, which the company have bought since their manufacturer’s introduction.

Transmission is invariably provided by Eaton 18-speed gearboxes to Eaton 2-speed double-drive bogies. A liftable and steering pusher axle is in front. Later version are fitted with twin wheels on the pusher-axle to comply with recent Californian legislation: which requires axles to have 4 tyres to run at maximum weight capacity.

The Kenworthsare spec’d with extra large radiators  – to keep the engines cool when climbing steep gradients with heavy loads. There is no set return policy; in fact some of the tractors have run over 100,000 miles!

V Van Dyke have been in business since 1949. In that time they have hauled thousands of beams, many of them from a local company, ‘Concrete Tech’, situated in Tacoma.

The company regularly goes ‘out of state’ hauling beams, including the transport of 64 x 115ft long beams to a new bridge between Arizona and Nevada, over looking the Hoover Dam. One mammoth task involved taking beams as far as Florida, 3000 miles to the East. One big job was the transport of 18 concrete bridge beams – 250ft long, each weighing 114 tonnes – to a job in Seattle.

Carl Buss then developed a new trailer system to cope with their weight and comply with state regulations.

The jeep dollies had 2 rows of axles with 8 wheels across each row, and a booster-axle behind the tandem bogie. The axles were able to provide dual-lane operation, increasing the allowable weights.

With 8ft 4″ high girders giving an overall height of 165ft, a tricky part of the operation was manoeuvring the loads between overhanging traffic lights.

The girders were moved at dusk, leaving Tacoma between 7 and 8pm, with the police escort tripping stop and turn-lights to keep the loads moving. Despite the traffic, the 30-mile trip only took around an hour and a half. The remainder of the job involved hauling a quantity of 160ft girders, a much simpler operation.

A typical job carried out by V Van Dyke involved hauling bridge beams from Concrete Tech, to a job in Saxon, near the Canadian border. Two outfits travelled together, comprising KenworthT800 8×4 tractors with 3-axle dollys plus 3-axle steercars and 3-axle dollys at the rear.

The beams were loaded at Concrete Tech by straddle carriers, before being securely chained down. Air and electrical-lines were strung along them to link the tractor and steercar. The beams were 90ft long, giving an overall length of 140ft, and a gross weight of around 85 tonnes.

Both Kenworths left the works at the permitted time of 8:30am, traveling out ontothe I5: the highway runs all the way from Mexico to the Canadian border.

No escort vehicles were required on the freeway, where the two loads travelled at normal highway speeds. They kept to one lane where possible, but bridges over the freeway have only 14ft 6″ clearance – often lower in one lane – so a certain amount of lane-changing had to take place. Not easy when surrounded by impatient motorists (sound familiar?).

After a couple of hours, the two Kenworths turned off the interstate: were met by the pilot cars for the remainder of the move.

The escorts travelled in front, to keep the truck driver informed on what was ahead. At tight intersections, with no traffic lights, the pilot cars blocked oncoming traffic, allowing the loads the best line – which often required the whole road width.

On arrival at the site, the first of the two Kenworths was able to drive close to the cranes – enough to enable the front of the beam to be lifted clear. This allowed the vehicle and jeep-dolly to head off and turn around. Meanwhile the steercar and rear-dolly were gently pushed by a CAT wheeled-loader within the reach of the decond crane, which lifted the rear of the beam.

Due to the lack of room, the second Kenworth had to reverse down a steep slope to get the beam within the reach of the cranes. The reverse was undertaken with the steercar and the tractor some 40ft out of line initially – to lessen the effect of the slope. This tricky manoeuvre was accomplished in one steady reverse, without any need for a shunt. Any driver who has reversed a jeep dolly will know how tricky this can be: but thanks to the skill and experience of the two drivers, it was made to look very easy.

With the second beam in position, it was soon lifted off, enabling the steercar to be hooked up by the CAT loader in a similar fashion.

Job done, it was time for a relaxed run back to base – although the overall length of the truck, steercar and two dollies was still in excess of 70 ft.

Sincere thanks must go to Carl Buss for his invaluable help in the preparation of this article and photography. Thanks are also due to Aaron Kitahara for the use of his imagery, and to the late Martin Phippard.