WSDOT’s Tacoma-based partners on a sequence of girder milestones are Concrete Technology Corp., the top Pacific Northwest prestressed bridge producer, and its principal heavy hauler, V. Van Dyke Inc. Their latest record holder, a 223-ft. 4.5-in. WF100TDG (wide flange, 100-in. deep, thin deck girder), hovers five BNSF and Union Pacific rail lines and was placed along with 29 other WF100TDG or standard WF100G girders (170- to 220-ft. long) during the first three weeks of 2021. The girders form the final three spans of the nine-span Interstate 5 Southbound Puyallup River Bridge in Tacoma.

The crossing is the centerpiece of I-5: Portland Avenue to Port of Tacoma Road – Southbound HOV, a segment within the 20-year Pierce/Tacoma County HOV Lane Program. Concrete Technology’s I-5 SB Puyallup River Bridge schedule encompasses 84 girders, totaling just shy of 14,500 lineal feet. They are part of a $220 million design-build contract, running 2019-2022, under Guy F. Atkinson Construction, LLC of Renton, Wash., with Jacobs as the design-build engineer.

The I-5 SB Puyallup River Bridge’s longest prestressed girder bests by 9.5 inches prior record-length members placed on a nearby span in August 2020. The latter is the 70th Ave. Bridge, just two miles to the east along I-5, consisting of a single span with ten 222-ft. 7-in. long WF100G girders. Built outside the Pierce/Tacoma HOV Program, the 70th Ave. Bridge crosses I-5 with no intermediate pier in the median and entailed only two weekend night closures for girder erection. Site complications and a larger precast package saw Atkinson Construction stage the final three Puyallup River Bridge spans over five January 2021 nights, each requiring I-5 southbound lane closures.

“Lateral stability calculations indicate that a lightweight WF100G at 223 feet would be acceptable, but transfer and experience with the 70th Ave. Bridge girders led us to the WF100TDG spec,” explains Concrete Technology Vice President and Director of Engineering Steve Seguirant, P.E. “The 70th Ave. girders were also lightweight but did not have the additional 12 inches of top flange width. They were noticeably more flexible laterally than the WF100TDG girders, primarily due to the reduced modulus of elasticity and modulus of rupture properties of the lightweight versus normal weight concrete. WSDOT staff has determined that the additional top flange width roughly compensates for the reduced modulus properties of lightweight concrete.” 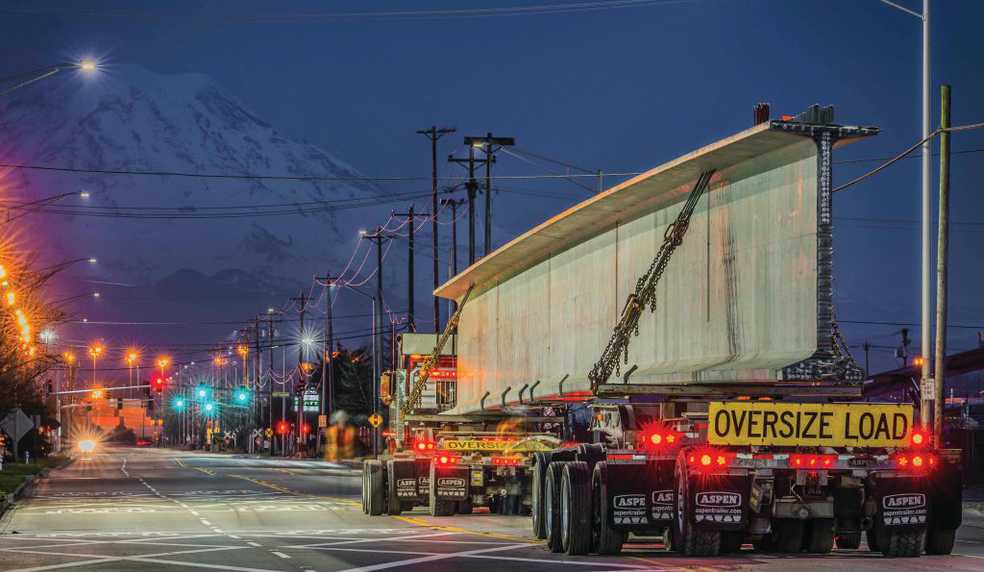 The ambitious engineering behind the I-5 SB Puyallup River Bridge and other I-5 corridor crossings reflects a sterling WSDOT, Concrete Technology and V. Van Dyke track record for scheduling and delivering 200-ft.-plus long bridge girders to Atkinson Construction and peers. Expansive right of way at the precast, prestressed producer’s Port of Tacoma yard has proved conducive to safe loading and routing of record-length beams. In the case of the I-5 SB Puyallup River Bridge deliveries, V. Van Dyke drivers were limited to a single turn prior to an I-5 entrance ramp, followed by a three-mile trek to the job site.

“We have a two-man crew for girder loads. Teams are paired around driving experience and a number of other criteria to ensure safe delivery and site staging,” explains V. Van Dyke President Steve Bates. “All prestressed concrete deliveries are site-specific, and total girder length is only one aspect of planning. Road grades, highway condition, lane width, bridge height, utility poles, and geometry of turns all factor into determining route feasibility and plant to site travel time.”

The I-5 SB Puyallup River Bridge jobsite served up complications, he adds: “The existing roadway side slope was 9 percent. Our safety protocol does not allow more than a 2 percent side slope. Above that level, the hauling unit must ramp up on blocks or crane mats to within 2 percent while the trailer is stopped and waiting for cranes to pick the load.” 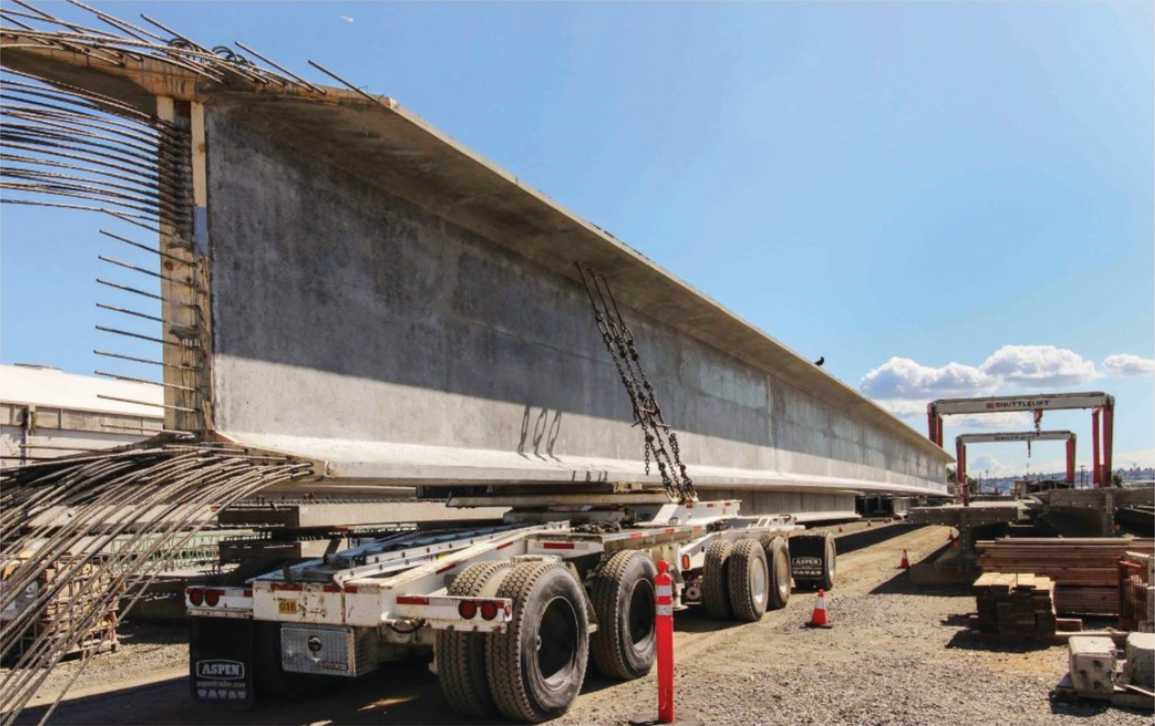 Concrete Technology tackled the I-5 SB Puyallup River Bridge and companion Pierce/Tacoma County HOV contracts on the strength of girder production upgrades completed in 2012. That work supported delivery of a then-record 205-ft. WSDOT WF100G girder for a Seattle road and rail crossing. Engineers detailed the current record length girder, 223 ft. 4.5 in., with 10 straight temporary strands in the top flange; 35 harped and 46 straight strands in the bottom flange, all 0.6-in. diameter. Unbonded and placed solely for handling and shipping, the top strands are cut after the girder is erected and braced. Crews have cast WF100G beams in the 200-ft. length class on two-day cycles with conventional high slump or self-consolidating concrete mixes of 10,000 psi design strength—prestress transfer requiring attainment of 7,500 psi to 8,300 psi strengths.

Crane staging and girder erection for the final three Puyallup River Bridge spans entailed I-5 southbound and Washington S.R. 167 lane closures. Atkinson Construction crews had to coordinate picks with BNSF and Union Pacific train schedules. “We were given specific times for setting girders over live railroad tracks and had to maintain constant communication with the rail operators,” recalls Project Engineer Ryan Cearley. “We could have been shut down anytime. Train passes at the Puyallup River Bridge did not affect us as much as we had anticipated, but at other sites ended up idling erection crews up to two hours.”

Freight train schedules aside, “We have figured out the handling basics for the extra length bridge girders common in the Pacific Northwest,” he continues. “There are some additional items to address on future work, like tightly coordinating foreman and engineer schedules around girder arrival, and determining the cranes best suited for working with such large members in a very tight environment. After setting extra-long girders, there are nuances in deck casting that differ from more conventional length beams.”

Atkinson Construction and V. Van Dyke crews’ safe, timely execution of the record-length girder placement, coupled with the WF100TDG mix design and cross section optimization, has compelled discussion of new WSDOT prestressed bridge practice milestones, notes Concrete Technology’s Steve Seguirant. “We have recently fielded an inquiry for 230-ft. girders to span a river for a city project. Now that the word is out of this capability, we anticipate significant interest if an entire freeway, river or railroad track combination can be spanned with no intermediate piers,” he affirms. “The primary question will be if girders can be transported to the site by road. The Pierce/Tacoma County HOV segments were design-build; it is critical in such projects that prestressed concrete producers and their haulers are kept in the loop during bridge design.” 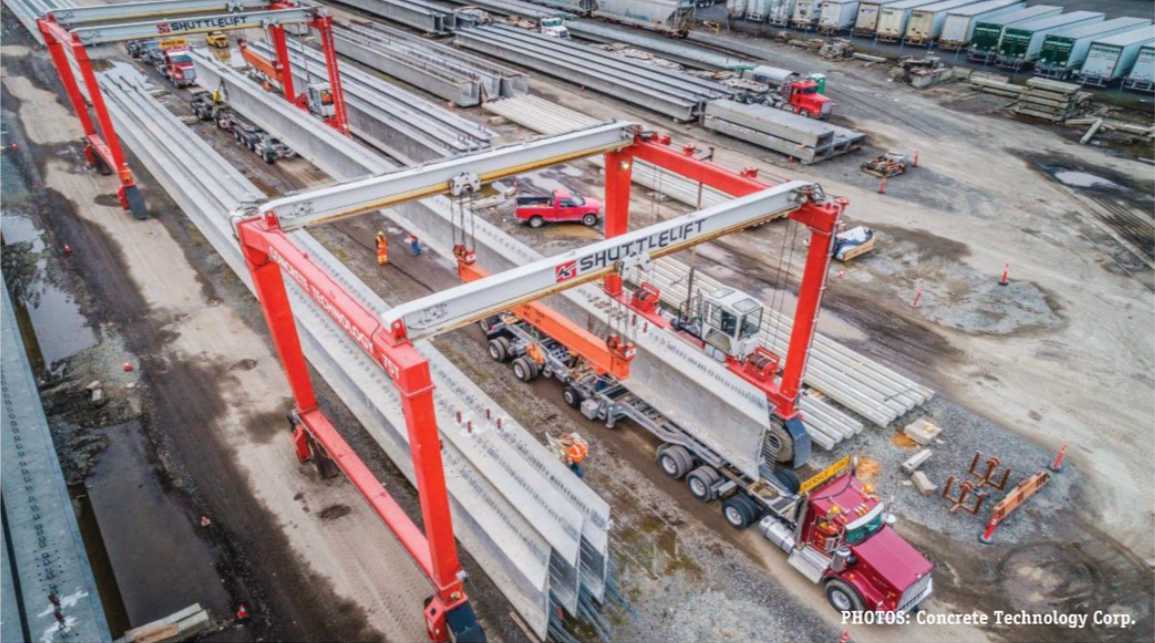